There have been a variety of fascinating and innovative architectural styles implemented over the course of human history, from the vast and monolithic pyramids of ancient Egypt to the Neo-Modernistic designs of more recent times.

Today we’re going to delve into the world of Gothic architecture, which began in the early 12th century. Symmetrical cathedrals with vaulted ceilings that rose to dizzying heights, stained-glass windows emblazoned with beautiful artwork that inspired faith and captivated the imagination and stone gargoyles carved with precise detail that leered at passerby from the epic buildings on which they were placed. All these elements, and so much more, make up the Gothic style that has continued to influence architectural design and philosophy throughout the ages.

What is Gothic Architecture?

Before Gothic architecture came around, buildings such as castles and cathedrals were dark and damp places. This was due to the inability to build them up tall and incorporate windows that were large enough to let natural light in, as the structures would not be able to bear the weight of the heavy stone walls and ceilings without compromising stability. As a result, many of these buildings could not support stone roofs and so had to use wood, which often let in rain.

After the implementation of these innovations, structures could be built that let in tons of natural light and turned what would normally be traditional stuffy, damp structures into interiors with huge amounts of space that inspired awe and wonder in those who entered. These environments lent themselves well to the religious purposes of cathedrals and churches, particularly with the addition of stained-glass windows and detailed sculptures, which often depicted saints and other religious figures. 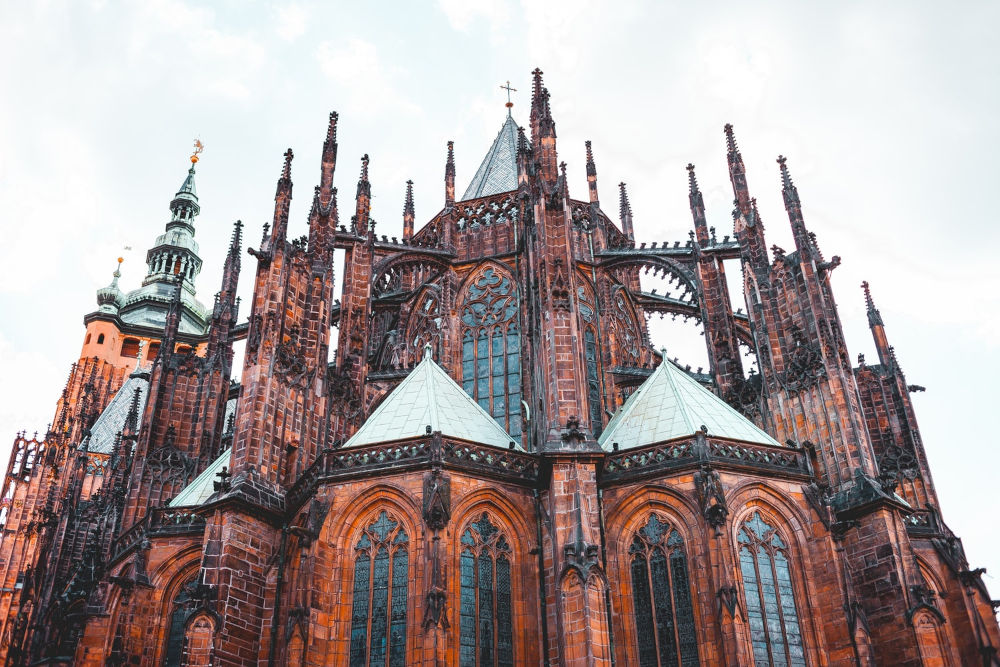 The Main Characteristics of Gothic Architecture

There’s a reason I was so quick to proclaim that the pointed arch is the main defining characteristic of the Gothic style and that is because it is the foundation upon which all other elements of this architectural method rely on. This is because the pointed arch is much more efficient at distributing the weight of the walls than the rounded arch, which had previously been the default building method of the time. This innovation allowed walls to be constructed higher than ever before, which is turn led to the magnificent and imposing cathedral designs we all know and love, such as the Cathedral of Notre-Dame in France. 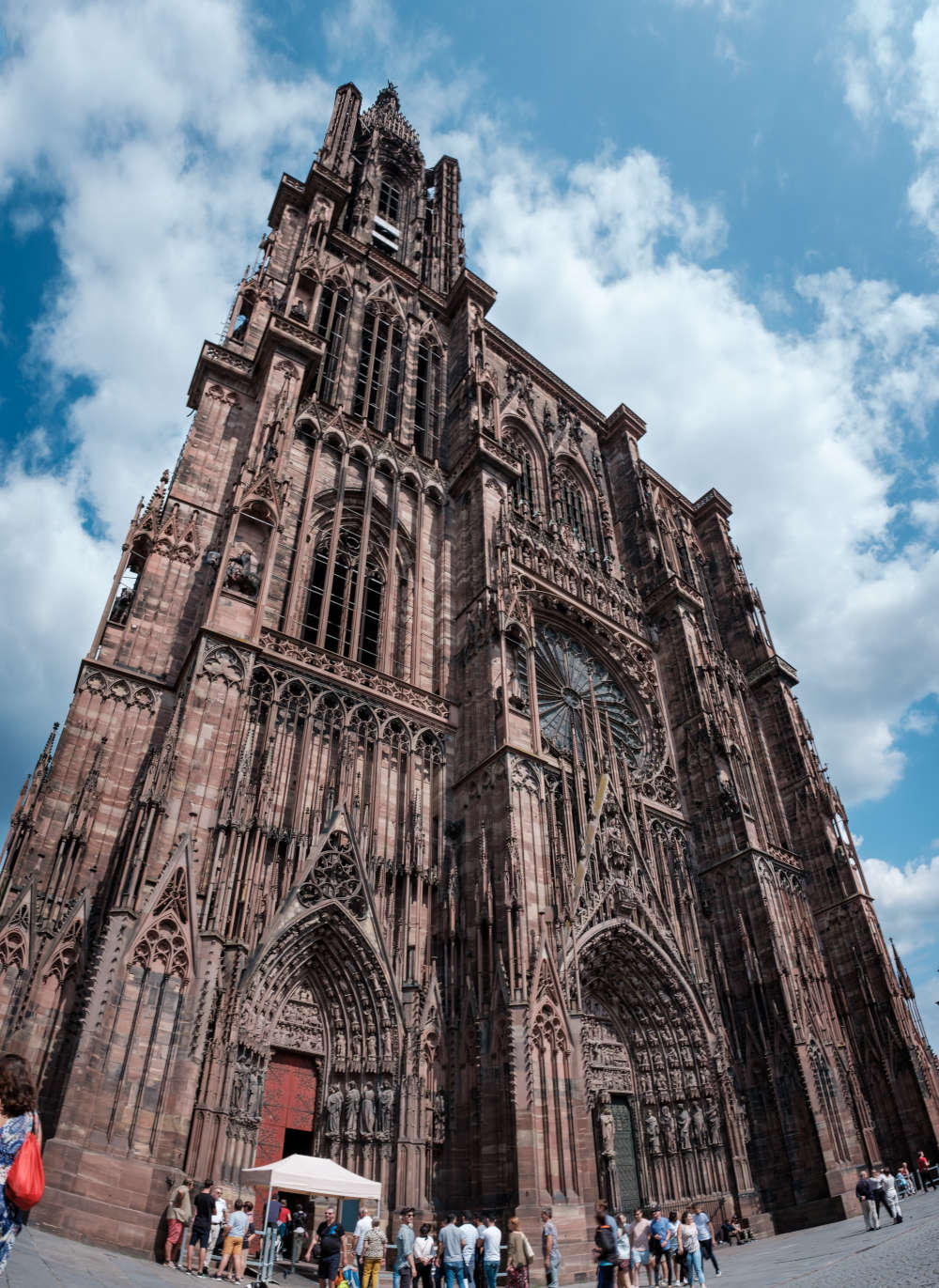 Pointed Arches on the Cathedral of Notre-Dame

Unlike traditional buttresses of the era, flying buttresses acted as both a more efficient way to stabilize the structure and a beautiful artistic addition that became the calling card of the Gothic style. They work synergistically with the pointed arches to fully support the tall buildings into which they are built and further reduce the load. The flying buttress, unlike the traditional buttress, is not in contact with the ground but rather built into the higher levels of the building, which allows it to convey to the ground the lateral forces that push a wall outwards and so provide enhanced support for these massive Gothic structures. 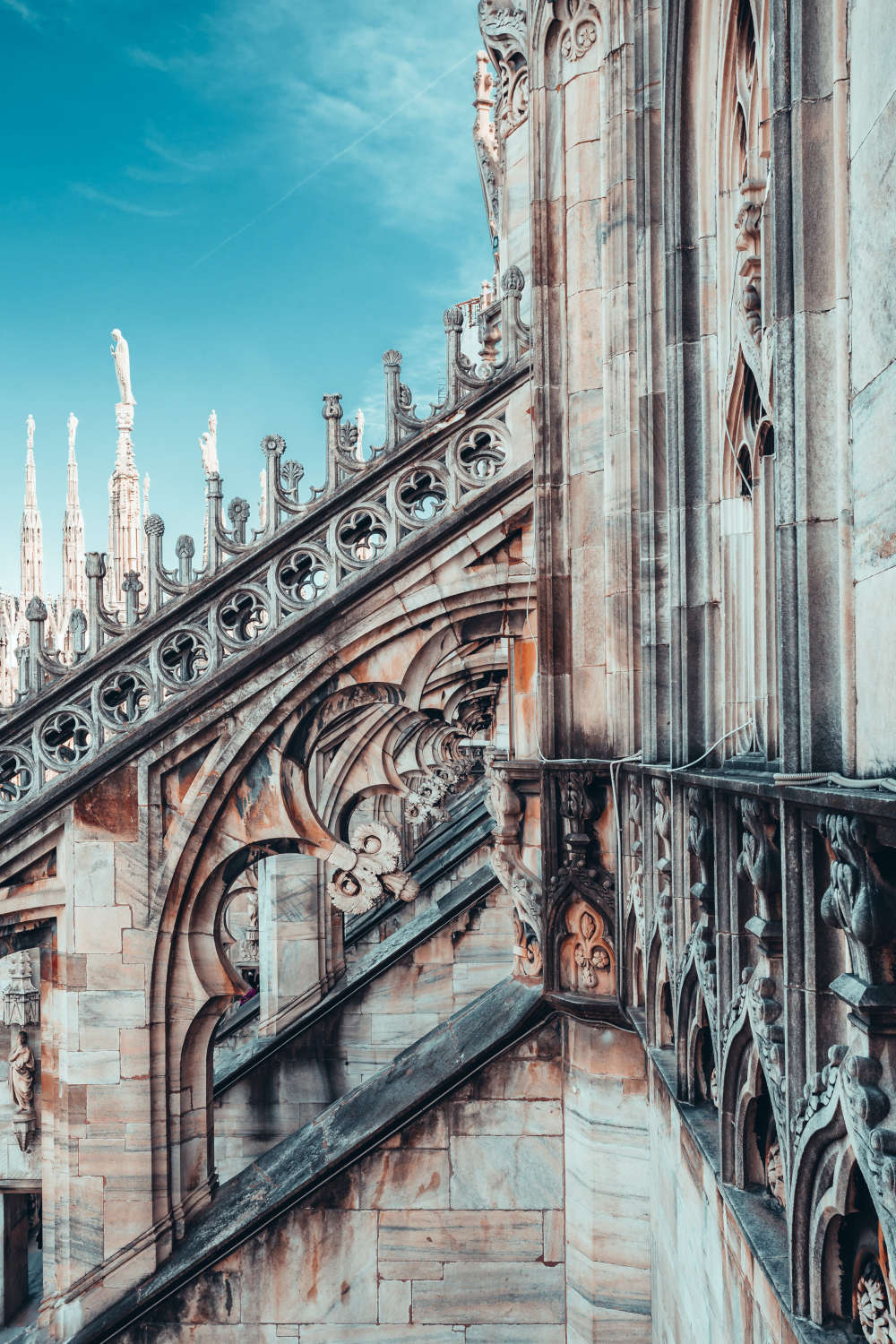 A Flying Buttress on the Milan Cathedral in Milan, Italy

If you’ve ever been inside one of the great cathedrals built in the Gothic style, one of the first things that will strike you is the immense height of the ceilings that seem to reach up to the heavens themselves. In addition to being extraordinarily tall, they are also works of art in their own right, often painted with elaborate murals. The vaulted ceiling is an innovation made possible, once again, by the invention of the pointed arch. The vaulted structure allowed for a greater capability of transferring the weight of the roof to the ground through its often intricate, crisscrossing structural elements. 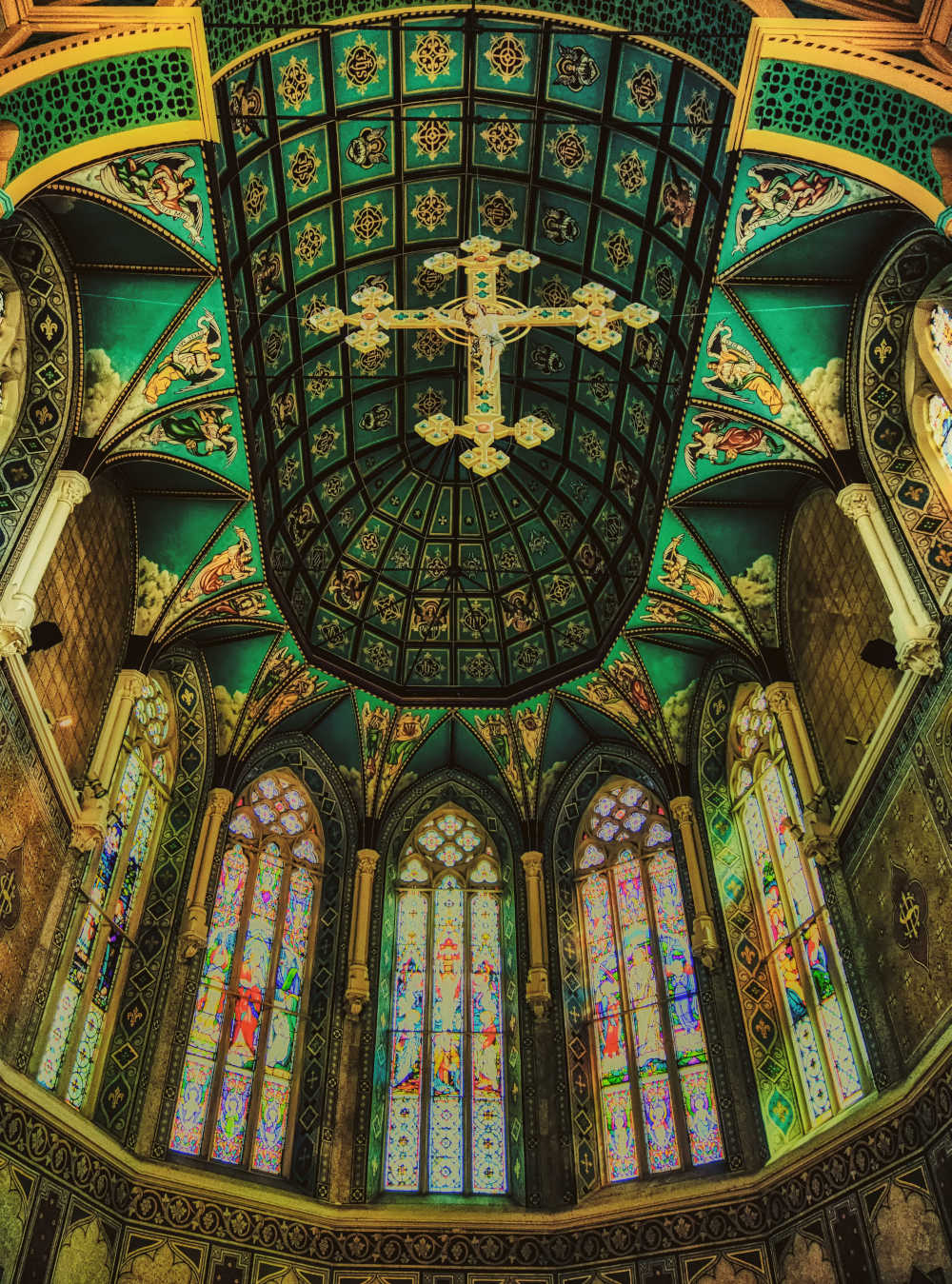 A fixture of cathedrals around the world, the massive and colorful stained-glass designs were not possible before the rise of Gothic architecture. The thinness of the walls and the heights made possible by the pointed arch meant artists were given a whole new medium to explore and they took full advantage by creating breathtaking religious scenes that inspired faith in the masses. Gothic window tracery allowed for smaller and more precious pieces of glass to be inserted and protected and this is how the artists who created them were able to create beautiful scenes with such vivid detail. 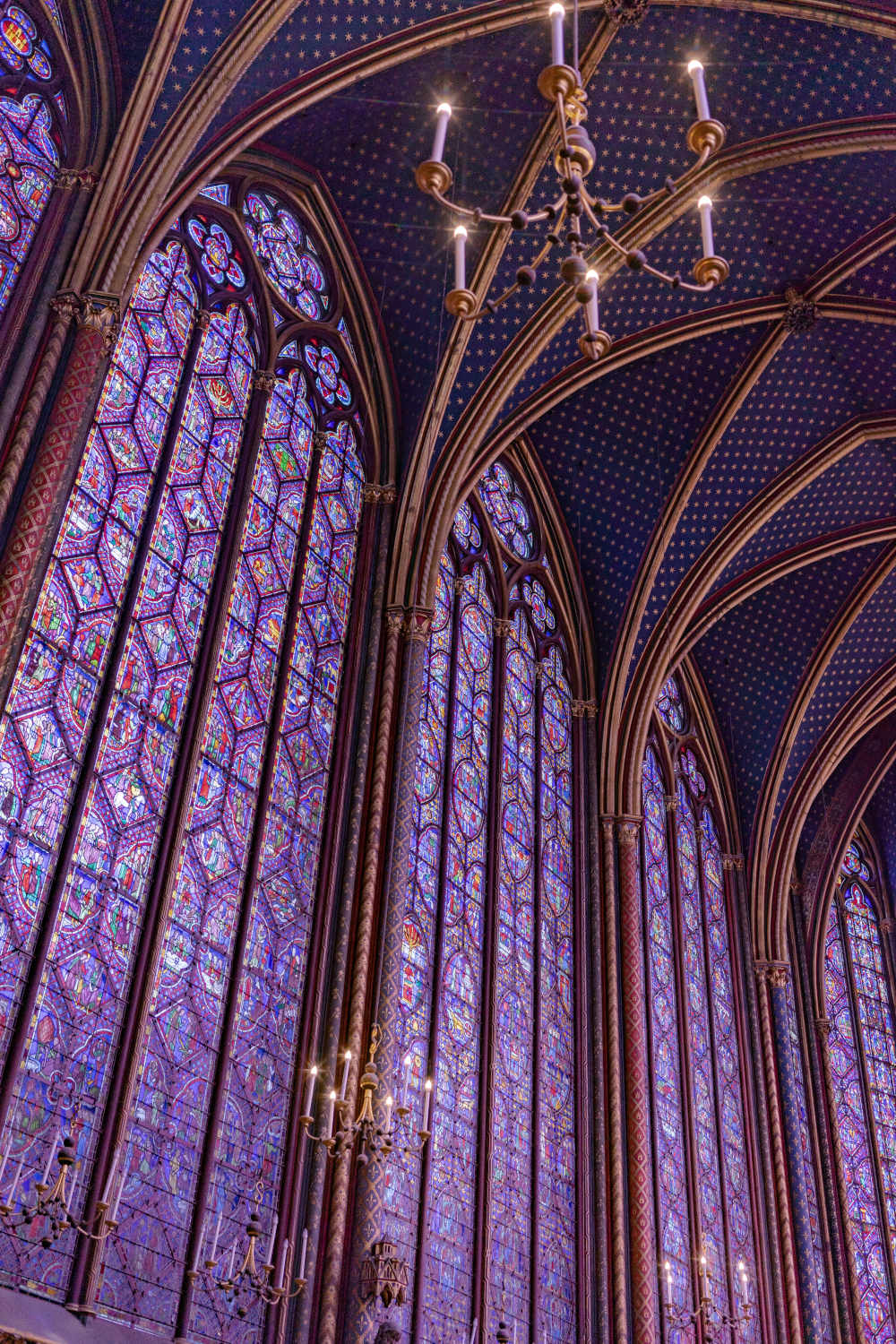 The grotesque and imposing gargoyles that surround Gothic structures are not just for show, they also act as drain spouts to assist in draining excess rainwater that had fallen on the roof. There are a number of theories surrounding the reason why such monstrous creatures were chosen to be adorned on a church as drain spouts. One theory posits that they are meant to represent evil and sin and so act as a sort of warning to those who view them, which could certainly help bring people into the cathedral. Another theory is that they are wards to fend off evil spirits and prevent them from entering the church. Yet another concept sees them as representations of some of the Pagan beliefs that existed within the community at the time. Regardless of why they are there, they certainly provide a fascinating glimpse into the beliefs of the times. 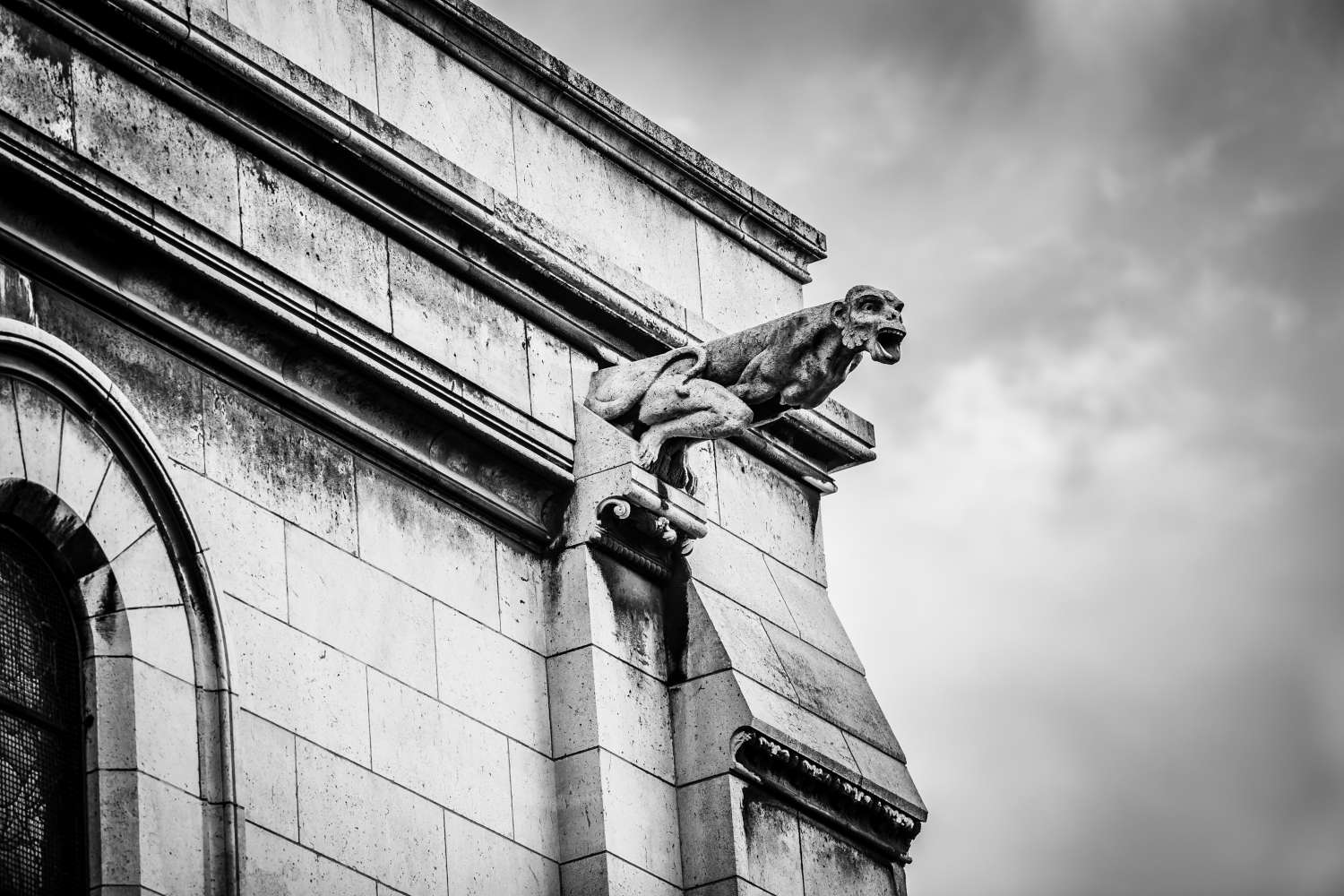 The Revival of Gothic Architecture

Like all arts, Gothic architecture was not a stagnant formula but rather evolved over the years and saw improvements and innovations as different architects and builders came up with new concepts and applied them. Greater ornamentation, with more numerous and elaborate sculptures turned many Gothic structures into veritable art galleries with not a single foot remaining uncovered by a bevy of religious figures, saints and demons. The vaulted ceilings, flying buttresses and stained-glass windows all saw a similar evolution and become more and more detailed and efficient over time.

Gothic architecture did, however, eventually fall out of favor after the 14th century and was replaced by Classical forms of architecture brought on by the Renaissance. Although Gothic methods did fade to the point where, in the 17th century, many architects considered it garish and unattractive (what on earth were they thinking?), it saw a revival in the mid-18th century and its influence continues to inspire architecture to this day.